Arya Samaj has a great future ahead

Arya Samaj –meaning; a society of nobles — is a non-political, spiritual and social organization campaigning in favour of women’s education and widow remarriage while opposing caste discrimination. The main purpose behind the organization was to reform orthodox Hinduism in India. 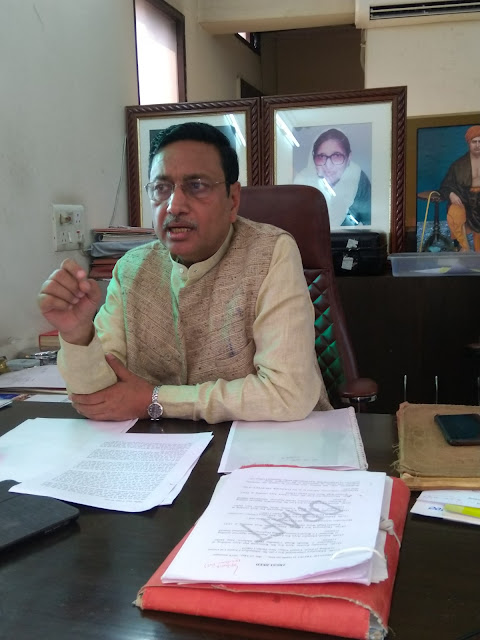 Arya Samaj –meaning; a society of nobles — is a non-political, spiritual and social organization campaigning in favour of women’s education and widow remarriage while opposing caste discrimination. The main purpose behind the organisation was to reform orthodox Hinduism in India.

President of Delhi Arya Pratinidhi Sabha, Dharampal Arya belongs to a generation which has a great responsibility on its shoulders. The generation before him was totally committed to Arya Samaj the Hindu reformist movement founded by Swami Dayanand Saraswati. The greatest challenge before Arya and others in his age group is to ensure that the values, beliefs and principles mentioned in the Vedas reach the Generation X (influenced by MTV, YouTube, Facebook, Twitter and WhatsApp) — so that they too abstain from idol worship and remain committed to the values promoted by Swami Dayanand in the holy book Satyarth Prakash (“the light of truth”). Excerpts from an interview with Neeraj Mahajan

At the time when it started, the people who initially joined the Arya Samaj – maybe in the generation before you were quite committed. Is the generation after you as committed or is their commitment getting diluted?

I would like to emphasize that the future of Arya Samaj is very bright. Do you know why? Well, that’s because the computer savvy new generation is not ready to say or accept anything that is not logical. You may try to pressurize them to whatever level; they will not accept something that does not satisfy their quest or hunger for the reason and at the same time seem rational or logical. For a brief moment, this might give the impression of dilution of values but because the founding principles behind Arya Samaj are deeply rooted in reason, logic and fulfilment of the quest for knowledge, I strongly believe that Arya Samaj has a great future.

Another point that I wish to make in this context, is that our youth today is totally disillusioned by the  inappropriate behaviour and misdemeanour of the religious leaders or Godmen that have been reported in the media including those which haven’t been exposed yet in the last 5-10 years. This has hurt the youth very badly. That is why I can categorically say the Arya Samaj has a great future ahead.

I would like to make a clear-cut distinction between Arya Samaj as an institute and Arya Samaj as a thought. If you compare the two, you may say that Arya Samaj as an institute is not what it used to be and is weaker than what it used to be earlier. I am prepared to accept this but this does not mean that Arya Samaj is getting extinct. Today’s youth may vary of the term Arya Samaj but is definitely not averse to the Arya Samaj’s ideologies, thought and values. There is a synergy between the two because of the rational and logical elucidations that satisfy their intellectual quest. The youth today is quite motivated but even then if you say that this needs to be enhanced I would agree with you and say that just like you can climb up from good to better and best — there is no limit for further improvement.

What steps are you taking to satiate the mindset of the youth with your ideology and logic?

This change in perception is not something that can crop up because of the efforts of a single individual unless there is a collective effort by everyone involved who think and behave accordingly. Generally, it has been observed that people prefer to take the easiest way out in most situations. Arya Samaj does not encourage the easiest way. By the easiest way, I mean going to a temple, donating some money and bowing your head to get your heartfelt wish fulfilled. Alternatively, I go to a Mzaar, drape it with a sheet of cloth and light a few incense sticks to get all my lifelong sins forgiven. Arya Samaj does not believe in this concept. Arya Samaj’s viewpoint is that you will have to pay for whatever deeds you do. Extending this argument a little further, it means that if you have done 80 good deeds and 20 bad ones—this does not mean that you will get 80-20 = 60 payback or reward points. As per Arya Samaj’s ideology, there is no correlation between the two, you will separately get rewards for the 80 good conducts and 20 bad deeds. This is quite clear and there is no ambiguity in the Arya Samaj’s concept and belief. In other words, this means that I cannot give a false assurance to anyone as an individual or at the institutional level that if you come here regularly all your sins will be forgiven.